As the true horrors of the Third Reich began to be exposed immediately after World War II, the Nazi war criminals who committed genocide went on the run. A few were swiftly caught, including the notorious SS leader, Heinrich Himmler. Others, however, evaded capture through a sophisticated Nazi organization designed to hide them. Among those war criminals were Josef Mengele, the “Angel of Death” who performed hideous medical experiments at Auschwitz; Martin Bormann, Hitler’s brutal personal secretary; Klaus Barbie, the cruel "Butcher of Lyon"; and perhaps the most awful Nazi of all: Adolf Eichmann.

Killing the SS is the epic saga of the espionage and daring waged by self-styled "Nazi hunters." This determined and disparate group included a French husband and wife team, an American lawyer who served in the army on D-Day, a German prosecutor who had signed an oath to the Nazi Party, Israeli Mossad agents, and a death camp survivor. Over decades, these men and women scoured the world, tracking down the SS fugitives and bringing them to justice, which often meant death.

Written in the fast-paced style of the Killing series, Killing the SS will educate and stun the reader.

The final chapter is truly shocking. 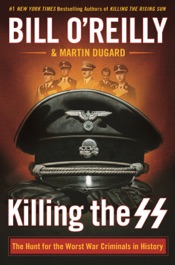