If man uses the senses which God has given him, he gains knowledge; if he uses them not, he remains ignorant. Mr. R. A. Proctor, who has been called “the greatest astronomer of the age,” says: “The Earth on which we live and move seems to be flat.” Now, he does not mean that it seems to be flat to the man who shuts his eyes in the face of nature, or, who is not in the full possession of his senses: no, but to the average, common sense, wide-awake, thinking man. He continues: “that is, though there are hills and valleys on its surface, yet it seems to extend on all sides in one and the same general level.” Again, he says: “There seems nothing to prevent us from travelling as far as we please in any direction towards the circle all round us, called the horizon, where the sky seems to meet the level of the Earth.” “The level of the Earth!” Mr. Proctor knows right well what he is talking about, for the book from which we take his words, “Lessons in Elementary Astronomy,” was written, he tells us, “to guard the beginner against the captious objections which have from time to time been urged against accepted astronomical theories.” The things which are to be defended, then, are these “accepted astronomical theories!” It is not truth that is to be defended against the assaults of error—Oh, no: simply “theories,” right or wrong, because they have been “accepted!” Accepted! Why, they have been accepted because it was not thought to be worth while to look at them. Sir John Herschel says: “We shall take for granted, from the outset, the Copernican system of the world.” He did not care whether it was the right system or a wrong one, or he would not have done that: he would have looked into it. But, forsooth, the theories are accepted, and, of course, the men who have accepted them are the men who will naturally defend them if they can. So, Richard A. Proctor tries his hand; and we shall see how it fails him. His book was published without any date to it at all. But there is internal evidence which will fix that matter closely enough. We read of the carrying out of the experiments of the celebrated scientist, Alfred R. Wallace, to prove the “convexity” of the surface of standing water, which experiments were conducted in March, 1870, for the purpose of winning Five Hundred Pounds from John Hampden, Esq., of Swindon, England, who had wagered that sum upon the conviction that the said surface is always a level one. Mr. Proctor says: “The experiment was lately tried in a very amusing way.” In or about the year 1870, then, Mr. Proctor wrote his book; and, instead of being ignorant of the details of the experiment, he knew all about them. And whether the “amusing” part of the business was the fact that Mr. Wallace wrongfully claimed the five-hundred pounds and got it, or that Mr. Hampden was the victim of the false claim, it is hard to say. The “way” in which the experiment was carried out is, to all intents and purposes, just the way in which Mr. Proctor states that it “can be tried.” He says, however, that the distance involved in the experiment “should be three or four miles.” Now, Mr. Wallace took up six miles in his experiment, and was unable to prove that there is any “curvature,” though he claimed the money and got it; surely it would be “amusing” for anyone to expect to be able to show the “curvature of the earth” in three or four miles, as Mr. Proctor suggests! Nay, it is ridiculous. But “the greatest astronomer of the age” says the thing can be done! And he gives a diagram: “Showing how the roundness of the Earth can be proved by means of three boats on a large sheet of water.” (Three or four miles.) But, though the accepted astronomical theories be scattered to the winds, we charge Mr. Proctor either that he has never made the experiment with the three boats, or, that, if he has, the experiment did NOT prove what he says it will. Accepted theories, indeed! Are they to be bolstered up with absurdity and falsehood? 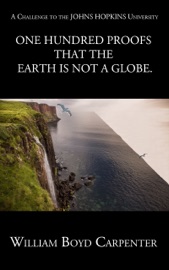