A Christmas Gift is a reprint of a novel first published as The Melodeon by Doubleday in 1977. Glendon Swarthout later realized he'd given this holiday tale the wrong title and it was reissued in 1992 by St. Martin's Press with the missing "Christmas" in its title. This story was also made into a CBS Television movie in 1978, retitled A Christmas To Remember starring Joanne Woodward, Eva Marie Saint, and Jason Robards. That's where most readers have seen this story, when it replays occasional winter holidays on TV. Very confusing to fans, though, with 3 different titles for the exact same Christmas story.

This novella did make the New York Times bestseller list when first published and was very well-reviewed. It became a Readers' Digest Condensed book and was also condensed in Good Housekeeping magazine in December, 1992. Obviously A Christmas Gift has become a classic holiday tale with all these different editions and titles and a TV-Movie made from it as well.

On a stormy Christmas Eve on a remote Michigan farm during the Great Depression of the 1930's, a teenaged city boy and his old grandfather decide to give the family's heirloom melodeon (a small pump organ) to their impoverished local church so that, on Christmas morning, the congregation can sing to the accompaniment of inspiring music. But how are they to haul the heavy musical instrument through the most violent snow blizzard of the year? How? With fierce determination and the dubious help of four rambunctious girls -- and the intervention of a mysterious "Cavalryman" who will transform their young lives. Their neighborly triumph is a Christmas miracle indeed, and few have ever made it through reading this story's last poignant chapter without shedding a tear. 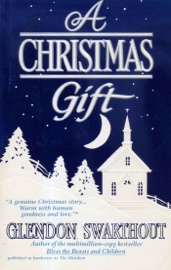